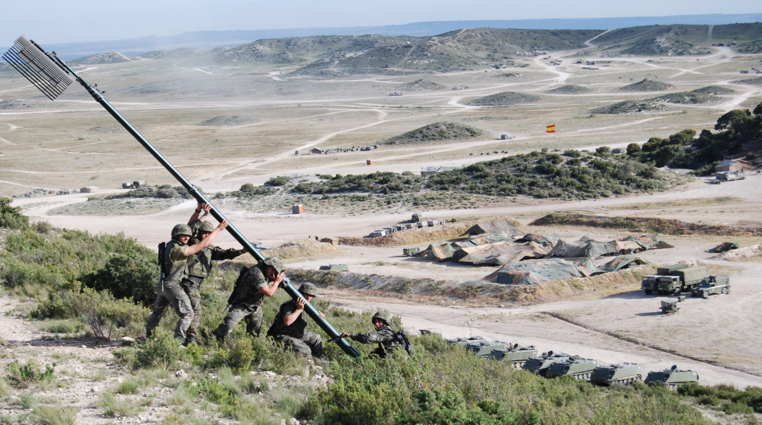 A high mobility Command and Control Center a the Brigadier General (OF-6) level (PCBRI) contains from twenty to thirty operator workstations. Each workstation consists on a computer connected to SIMACET (Command and Control Spanish Army digital network) and a telephony terminal. According to the PCBRI layout it supposes between three and five kilometers of signal wire.

Each time the PCBRI moves from one location to another one means removing and recabling several kilometers of wire and about three hundred wire connections. On the other hand beyond the work, personnel and material the main problem is the unavailability of the Command and Control Center between jumps and the connections reliability.

The development of a new wireless Command and Control Center was considered as a good challenge for applying “Human-Centerd Design” methodologies and the “Brigada Guadarrama XII” created a working group acting as final user, the Research Group “B105 Electronic Systems Lab” (Universidad Politécnica de Madrid) as technological and methodological partner, the Colegio Universitario de la Defensa (Zaragoza) both as technological and educational partner, the company Teldat and the Escuela Politécnica Superior del Ejército de Tierra as observer for, applying this methodology, develop a prototype to work inside of the PCBRI without wires.

The results of this project, apart of the experience of applying Human-Centered Design and SCRUM methodologies within the Spanish Army, is the development of a prototype of a high mobility Command and Control Center that copes with the demands of the Brigade where time and effort have been fully controlled. Main features are: