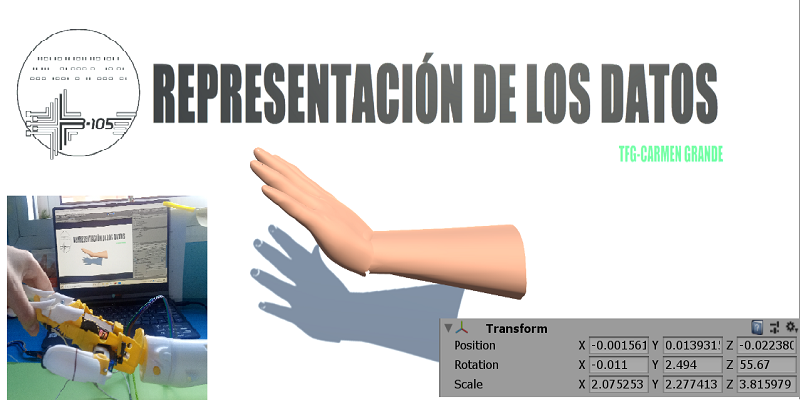 In the past the last few years, we have observed that new technologies have been improving the quality of life of all people, especially those who have difficulties in their daily lives. An example of this is prosthesis, which offers autonomy to those who need it, recovering part of the lost mobility.

This End of Degree project intends to carry out the sensorization of a wireless robotic arm. The objective of this project is to obtain information on the movement of the prosthesis and to analyse its behavior to improve the functioning of future prostheses, in such a way that it is as similar as possible to a human arm. We have specially focused on the movement of the wrist and the pressure exerted by the index finger and thumb.

Firstly, a previous study was carried out where we analysed the different angles of wrist rotation and their amplitude. Also, we studied the different ways that the hand makes to apply pressure to an object. On the other hand, we made a study of the different prostheses that exist today, separating them according to their mobility, to choose which was the robotic arm that better adapted to our study. Then, all the pieces of that arm were printed in a 3D printer to make its assembly.

Once the previous study has been carried out, the selection of sensors has been made. To do this, we made a small analysis of the different procedures that use these sensors to obtain the desired measurement. After this, a software has been created to obtain these measurements with the aim of being able to be interpreted by the user, through a graphic interface. A demo represents the movement of a human arm through the data provided by the sensor, as you can see in the figure above. The other demo is in charge of symbolizing through colors the different force exerted by the thumb and index finger.

Finally, different tests have been carried out to analyse the movement of the wrist and the pressure  exerted  by  the  fingers  according  to  the  different  positions  of  the  arm  and  using different forces.