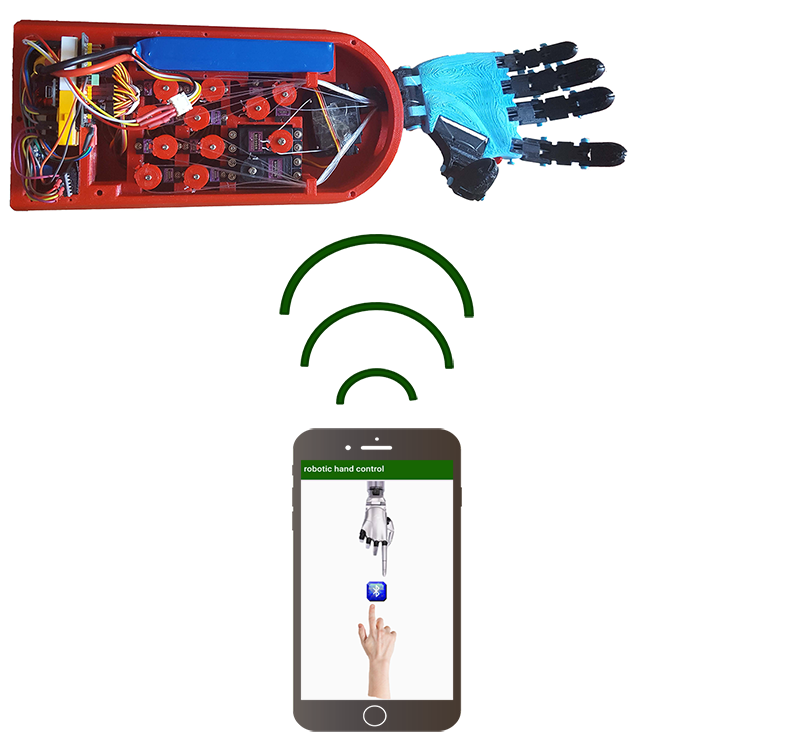 This final project focuses on the field of robotics aimed at developing automated prostheses, helping to recover part of the lost mobility of people who need it. More specifically, it will focus on analysing and designing a wirelessly controlled robotic arm, which will serve as the basis for future projects at the B105 Electronic Systems Lab.

To this end, a preliminary study was carried out of the technologies currently used to develop a robotic arm, extracting which components can be used to carry out the movement and control of the arm, what considerations must be taken into account to design the different parts that make it up and what prototypes currently exist, extracting their characteristics to try to find a way to improve them.

Once the previous study had been done, the design of the arm was carried out, where the way to control it, the type of wireless communication, the motorization to be used and how it is fed were chosen. After this, we have chosen the components that best suit to meet the specifications requested, the modeling program has been used to design the parts, the materials used to build them, and the type of manufacture used to make them. It has been concluded that the parts must be manufactured by 3D printing, that Bluetooth will be used as technology for wireless communication, and servomotors to motorize the system.

Afterwards, the connection has been made, the design of the pieces by means of a 3D modeling program and the subsequent manufacture of part of them by means of 3D printing. A mobile application has also been developed to control several servomotors and check the wireless connection between the arm and the mobile, in addition to having created several integration files on the board to check the operation of the components.

Then different tests have been carried out, using the software created, where different components have been connected, and it has been checked whether they work correctly or not.

In the end a complete functionality has not been achieved, but a partial functionality has been achieved where it has been possible to connect by means of Bluetooth the mobile and the arm, to move two servomotors, with which two fingers have been moved, and the battery has been controlled by means of a series of leds. Several problems have also been found with regard to the power supply of the servomotors and the reception of data sent by the board that controls the servomotors to the mobile.