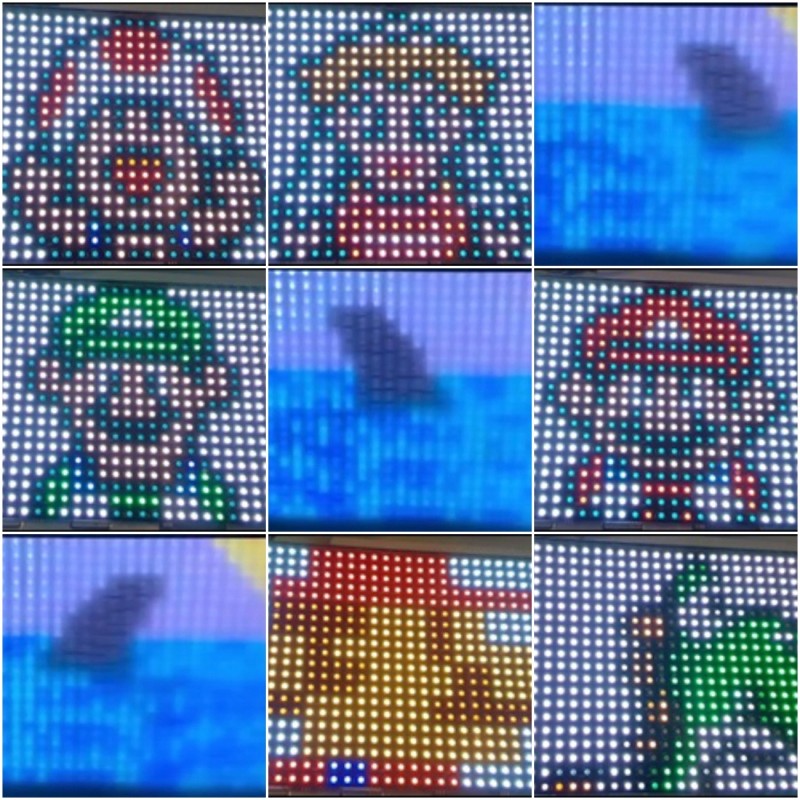 This project “A modular-reconfigurable presentation system design and implementation based on LEDs” consists of a LED screen design and development at hardware and software level, features cited in the name of this project.

In order to approach its design, we have started making an art state investigation, through which some similar projects to this one have been looked into.

Next, we carried out a hardware design and implementation. During this stage two hardware versions were developed.

Finally, some full system tests were also carried out.

The project has been developed in seven phases as shown as per below chart. 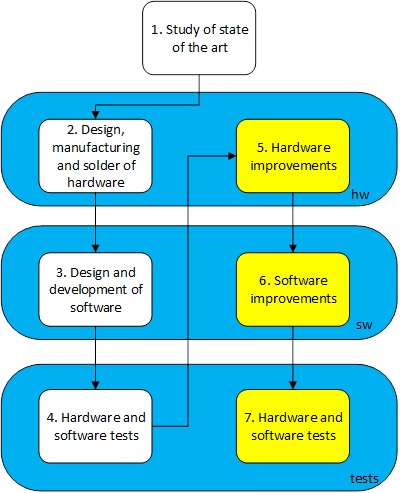 The main objective is broken down into four purposes

By means of next chart, hadware arquitecture is shown as per below. 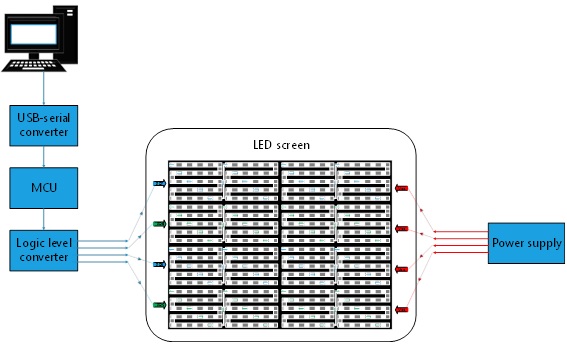 The LED screen is composed by four module rows of LEDs, each module row is assigned by a data line as per below.

For the LEDs screen, it has been decided to use several parallel data lines, due to it aims to overcome a LEDs handicap. This handicap consists of when broadcasting a 30 [frames/s] – streaming video. It does not allow to connect more than 1024 LEDs into serial architecture. Essentially because of timing  purposes. Which are exposed by means of this reasoning: If the rate to broadcast this video is 30 [frames/s], this indicates every 0.033 [s] a frame to display on LEDs is loaded. Tframe = 0.033 [s].

Checking out on, Tsend < Tframe.

For the case in which the rate to broadcast this video is 60 [frames/s], could be linked into  cascade connecting factors up to 512 LEDs.

Therefore, there is an inversely proportional relationship between the video rate broadcast and the number of LEDs to be connected in cascade.

The software architecture is composed by two phases, one developed to PC and another to microcontroller.

In the microcontroller phase, it is been defined both receiver and presentation blocks. In this stage continuously some bytes are received through UART and are shown on the screen.

The next diagram shows the software architecture.

The symbols are illustrated below.

Consequently, it is graphically represented by the way different blocks interact one another. 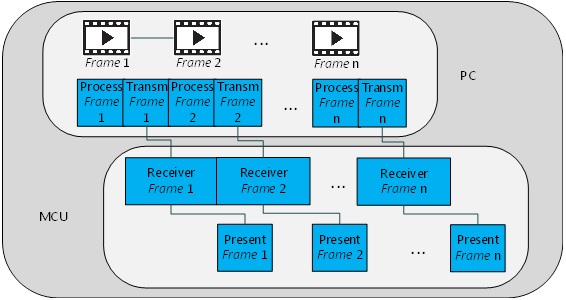 For a video composed by n frames, first the processor block is run for all the pixels within frame 1, then transmitter block sends GRB bits associated to frame 1 towards MCU. After that, receiver block is run for frame 1 and while presentation block shows GRB frame 1 bits on the screen, also GRB bits are received from frame 2.

This system has been tested projecting a video composed by 462 frames, this video is reproduced at 29.97[frames/s] speed. Next link illustrates that test.