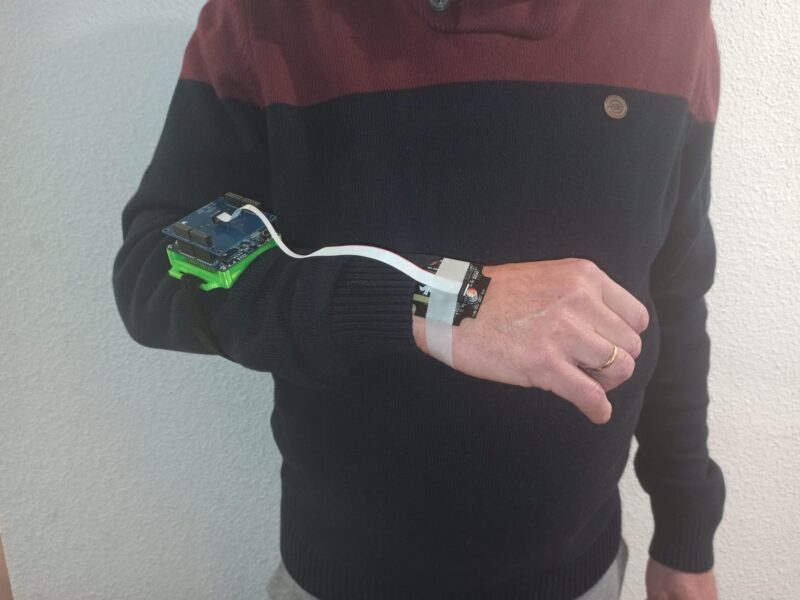 B105 Electronic Systems Lab, of the Electronic Engineering Department, developed in the past several nodes called ‘Yetimote’, which work on the ISM frequencies of 433 MHz, 868 MHz and 2.4 GHz. During the last years, one of the main target’s laboratory has been the study of wireless networks over the human body (WBAN), composed by sensor nodes that are placed on different points of such human body to collect data for several purposes, usually for medical applications. However, the Yetimote node is addressed to use traditional wireless networks (WSN), due to its size and specific physical format.

The objective of this project was to adapt this node for evaluating and developing WBAN networks. To achieve this goal, one of the main printed circuit boards of the Yetimote node, called Cerberus, which is in fact the part in charge of carrying the wireless communications out, has been modified to make it more wearable.

On the other hand, the context of the project has been analyzed in more detail, describing WBAN networks in depth, the most common characteristics of these networks and their different usages. After a detailed analysis of the requirements to be fulfilled by the new board to be designed in the context of this work, a very deep study has been carried out about possible antennas to be used in this new solution. Finally, the specific choice of the antenna to be used in this work for each band was determined based on its characteristics. One of the electronic components which humans are more accustomed to is a wristwatch, so the PCB has been designed to be integrated inside an enclosure with this shape.

The next step was the electronic design and the PCB implementation of the new board called ‘Mini-Cerberus’, which has been designed using the Altium Designer tool. This new PCB will be connected to the rest of the Yetimote node through the board ‘Auxiliar’ which will be connected to the ‘Mini-Cerberus’ PCB through a flat cable. In addition, the ‘Mini-Cerberus’ board has several versions, one of them has a Pi-Network for each frequency band. Finally, the components were assembled using an industrial furnace and by manual welding. In the figure below, the previous ‘Cerberus’ PCB is shown in front of the new ‘Mini Cerberus’ prototype.

Additionally, some trials have been carried out in real environments to verify the correct operation of the developed design. Several tests have been performed in different real-world scenarios to study the performance of the new Mini-Cerberus board for different frequencies and transmission power values, and these results have been compared with those obtained for the original Cerberus board, which was used as reference or baseline.

In conclusion, it can be affirmed that the new ‘Mini-Cerberus’ PCB has a better performance in WBAN scenarios in the 433 MHz frequency band, while the 2,4 GHz frequency band has the worst performance of those studied. In relation to the Cerberus board, the new prototype has a lower performance compared to the original model, but this is an expected result due to the modifications made for its miniaturization